Learning about the birth of the IBM S/360 while at the Computer History Museum is like eating chocolate biscuits wrapped in chocolate as far as I’m concerned. Last week I tasted the goodness.

Back in the day, you bought a computer and programmed for that computer alone. If you bought another one, this ran a different way and you had to program it differently. Now imagine how many PCs you’ve been through, and imagine how it feels for a company that wants to buy a computer, then grows and needs a bigger one. It sucks, and every time you switch it doesn’t matter if you buy an IBM, a Fujitsu or whatever – you have to rewrite everything anyway.

The S/360 was the first line of computers where architecture and hardware were separated. That meant that you could buy a little one, write programs for it, then buy a bigger one when the time came to upgrade. It meant less of a pain in the arse for customers, and a lock-in for IBM. Kerching!

The only problem was that the project was planned to cost $5bn over four years, which was way over IBM’s annual revenue at the time. They went ahead with the project – but why? They answer, as usual, is a bunch of different reasons.

Tom Watson Sr, who pretty much started IBM from scratch, was a Victorian, moral, old guy. This song probably helps explain better than I can. His son, Tom Watson Jr., was handed the reins just as Sr was shuffling off his mortal coil. They didn’t get on. The father never trusted the son. 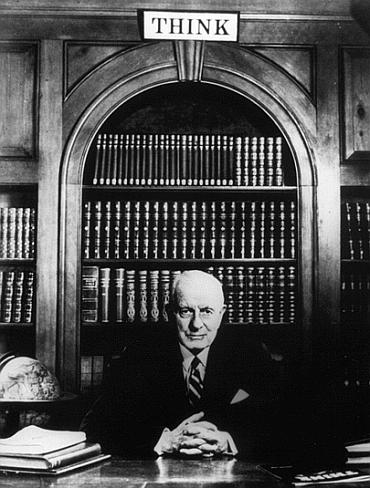 This is Watson Sr. Definitely a crusty old dude.

So the son, we suppose, wanted to do something to make IBM his own. But there’s more.

It seems that there was a culture of fear at IBM at the time. Fear of competitors, sure – but also fear of doing nothing and being squashed as a result. People argued with each other all the time, but the strong culture that Watson Sr. had installed kept the company together and working. This is the amazing part – the agitation that people felt was what drove them to win.

Andy Grove describes some similar stuff in his book about his time at Intel.

"Fear is powerful in creating and maintaining passion. Fear of competition, fear of bankruptcy, fear of being wrong and fear of losing can all be powerful motivators."

The strange part for me is that history repeated itself. There’s a formula for a successful culture here, but certainly not a comfortable one.

You’ve probably heard that one before, but it’s fascinating. Any successful company’s first instinct is to recognise what they did that was successful and repeat it. As time goes on, they become resistant to doing anything else – I mean, it seems completely illogical. Why would Microsoft do anything to endanger Office or Windows? Why would IBM leave hardware and turn into a services company? But the problem is that it leaves you completely open to attack by a competitor who is free from this way of thinking.

Lots of companies have thought a little further ahead, and released products that cannibalised their own – it’s better to do that to yourself than let someone else do it for you.

The class was taught by Prof Tedlow, who is one of the superstar professors at HBS, and a specialist in business history. It’s unexpected to see someone that skinny fill a stage, but that’s exactly what happened. He had help – the room was littered with old-school IBMers, including a couple of superstars.

That gentleman on the left is Tedlow. And on the right, Gene Amdahl, the chief architect of the S/360. (Oh – and he quit IBM, started Amdahl computers, which flopped and got bought by Fujitsu, to the amusement of the chap now working at Fujitsu who was sitting to my left.)

One more that I didn’t manage to get a picture of – Bob Evans, the S/360 project lead (hat tip to Karae in the comments).

There’s nothing really new that happens in business – culture changes, products that change the industry, engineering versus sales and so on.

I thought that technology was an exception.

Maybe not so much.